There are times when adding a split and sending users down different branches of a workflow might be useful to see which path returns the best outcome.

This is what the split action is for. 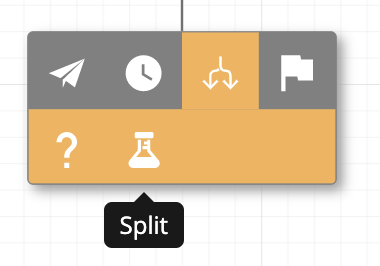 From here, clicking on the action will open the editor toolbox which has a single option to choose how many splits to have exit from the action. Up to 5 different splits can be added. Users arriving at a split action in a running workflow will be sent down a split completely at random.

To allow for the most efficient flow through a workflow, the journey builder determines the split to send a user through using a completely random algorithm with no weighting applied.

Multiple splits used in a single journey have no bearing on how a user will be sent through each one. A user being sent down path A for the first split they arrive at still has the same chance of going down any of the paths (A-E) at the second split action they arrive at.

The split algorithm also continues to be random no matter how many times the same user may pass through the same action. So a user being sent down path A on their first time through a journey is equally as likely to travel down any of the paths (A-E) on any subsequent journeys.

As the split action is only splitting the paths users may follow, the choice of what to follow up with is completely free for the marketer to choose. This allows for unlimited possibilities such as:

Split actions have a simple count on the reporting tab which shows number of users passing through the action (over time) and which split they were sent through (total for all time).

Once it has started running, if a new path is added to the split then that path will start counting from zero while all other paths will continue to count up as users pass through them. There will still not be any weighting applied to allow for the new path's figures to catch up. The algorithm will continue to assign users to paths completely at random.