If your project uses the legacy campaign interface you won't see the options for picking a winner or setting a test. To have your project upgraded to the new campaign builder and enable the pick a winner feature, speak to your Account Manager or contact support.

It's not recommended to set more than 7 variants.

If required, you can define the size of a control group by entering a percentage figure in the Control group size input field. This portion of the campaign's targeted users will not receive any messages.

Using a control group allows you to measure user activity between the audience that received a message and that which didn't, giving you a direct comparison of the influence gained by sending a specific message to your users.

Percentage of users receiving the test

Set a percentage of your campaign audience that will be sent the initial test. This can be anything from 1% to 100%. You should consider making sure the test audience is large enough to get some meaningful results. For example, setting a 10% test audience on a campaign that already has a small audience is not likely to give trustworthy results. If you want the whole campaign to be a test which will inform future campaign segmentation decisions, and not to send the winner in the current campaign, then you could consider setting up a 100% test audience and make sure everyone is included in the test.

Every recipient for whom the campaign is triggered will be sent a random variant. Once the time that is set in the test duration elapses, a winner will be selected. At this point, only the winner variant will be sent to all users triggering the campaign (including those who may have triggered it before and been sent a different variant to the winning one).

However, if there is also a 20% control group set up on this campaign then around 20 of those users will be included in the Control Group (and won't receive any campaign), and the remaining users (around 80) will be the test audience.

It is possible to leave this option off and run a test manually. The Xtremepush user is required to return to the campaign, view and make a decision on the engagement so far, and select a winner by clicking the select as winner button next to one of the variants. If however, the option for Xtremepush to select the winner automatically is enabled then two more options become available. They allow the user to set the rules for when and how a winner should be selected.

Set a length of time for the test to run. Once this period elapses, a winner variant will be selected. For example, setting a test time of 24 hours for a campaign due to start at 9 am on a Monday, will select and send the winner at 9 am on the following Tuesday.

The test length should be set to something appropriate for the campaign. Give recipients long enough to receive and engage with the messages, but not too long that the message will be out of date once it is sent to the remaining audience.

In order for Xtremepush to determine the winner, it is important to set how the decision is to be made. Any channel which is enabled for the campaign (and has a trackable metric) will be displayed in this selection. For example, adding email to the campaign will then allow for the selection of email opens and email clicks as a metric to check and determine the winner. Only one metric can be selected.

The ability to automatically pick a winner is not available to all campaign types. Below is a table which shows a quick reference to which options are available for each campaign type.

Winning variants are indicated with a trophy icon next to them. This can be seen both in the Setup tab for the campaign itself and on the analytics page for the campaign.

When a winner is selected, it is copied to a new variant, which is then used as the sent variant going forward. This makes it clear to see all engagement details for the test variants up to the point of a winner being selected, and for the winning variant from that point onwards.

Below is an example of how this could look: 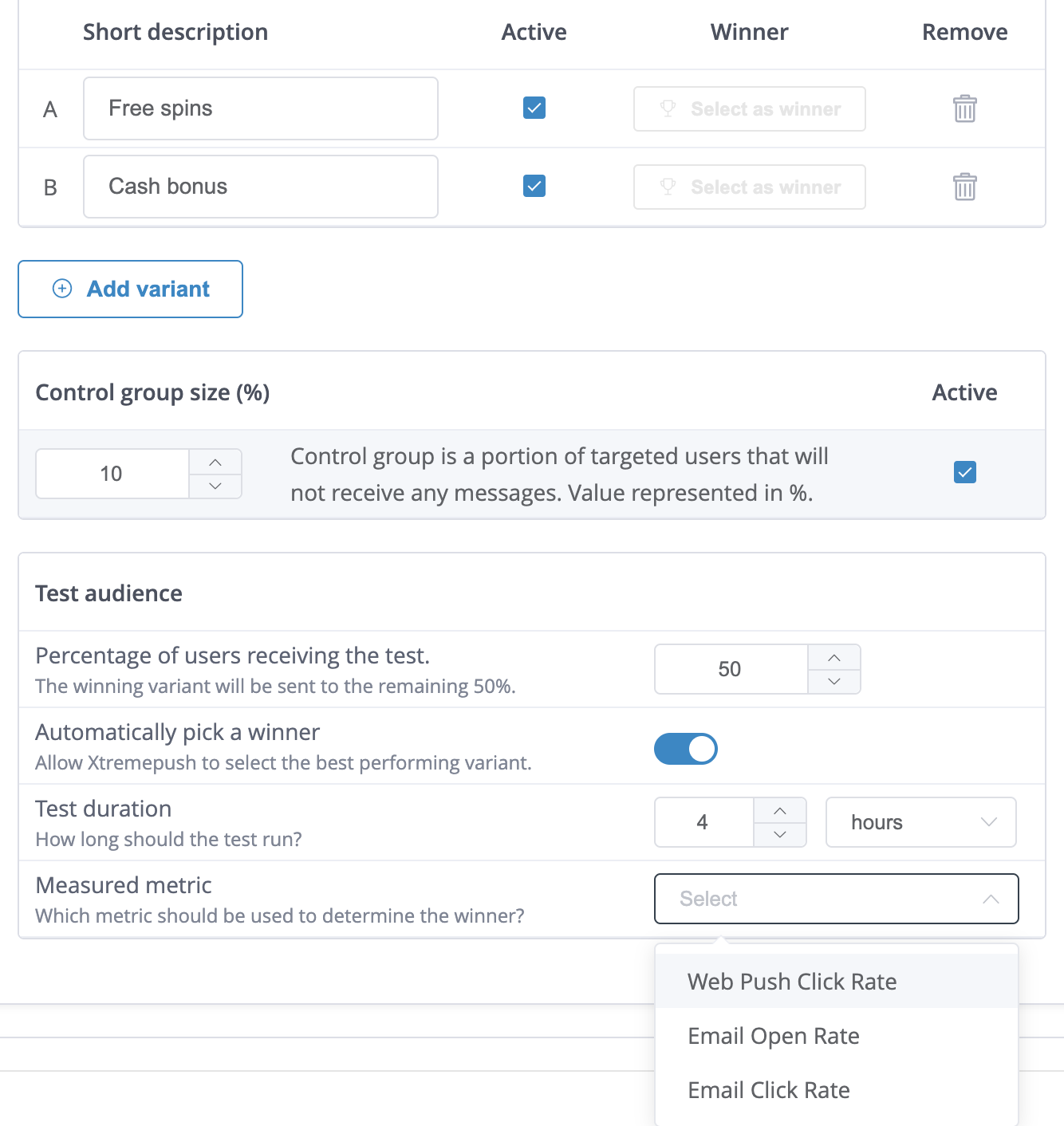 In this example, two variants are configured for a scheduled web push and email campaign.

After 4 hours, the system will determine which variant is the winner. This variant will now be copied to a new variant, and it will be sent to the remaining 450.