Our analytics suite provides data on the number of emails that have been opened and clicked by users. This can be reviewed from different parts of the system, such as email analytics, campaign comparison or, if you want to review the information for a specific user, from the notifications log or by downloading the campaign data.

To track clicks, when a recipient clicks a link included in an email they get seamlessly routed through an Xtremepush URL and then redirected instantly to the URL originally included in the email.

In order to track opens, the system adds a tiny, invisible image to the bottom of your HTML email at the time of send. The image reference is unique to each email and targeted user.

When a user opens the email, the image is downloaded from the system, and it is counted as an open for that user profile, increasing the open stats for that campaign.

Apple announced that from their Autumn 2021 OS versions (iOS 15, iPadOS 15, macOS Monterey, and watchOS 8), they will allow users to opt-in to a new Mail privacy protection feature. 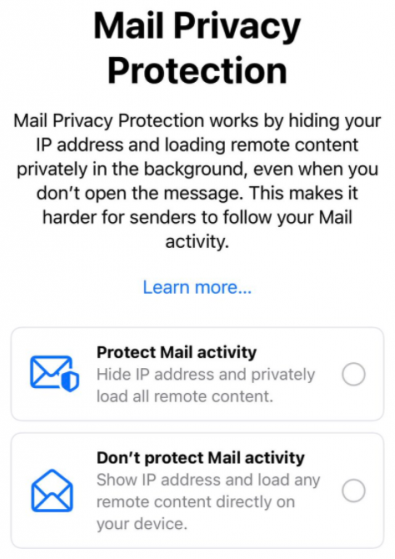 When a user selects Protect Mail activity, Apple will load emails' images through a proxy, so email senders cannot determine exactly when or where an email was opened. As Apple will pre-fetch all email images, rates for anyone using the Apple Mail client (including non-Apple email providers) will go to 100% regardless of their true engagement.